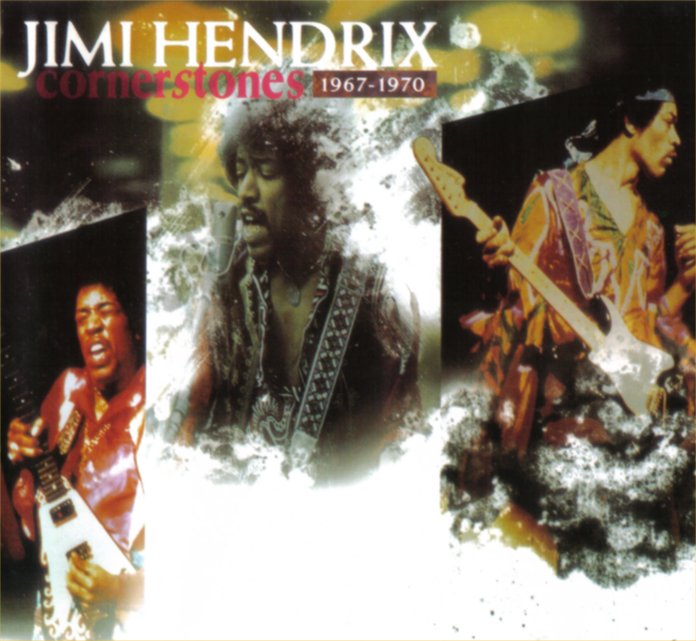 Jimi's early British recordings with Mitch Mitchell on drums and Noel Redding on bass apply super magnified tones to a mixture of musical styles never before heard. England's best rock musicians marvelled at the novel effects of these songs.

In I968 Jimi's performances spanned a spectrum of genres which is probably the broadest reach in popular music for any guitarist/singer. His "Electric Ladyland' album encompassed rock, blues, tool, funk, R&B, folk-rock, psychedelic, ballade, heavy metal, as well as jazz and even a sci-fi symphony.

The 1970 songs feature highly concise and detailed arrangements with the Mitchell/Cox rhythm section. At the close of his career Jimi continued to draw freely and seemingly effortlessly from perhaps the widest array of musical styles and human emotions ever synthesized by a single Instrumentalist. [Michael fairchild, 1990]

HEY JOE - Recorded in London on 4-tracks at Kingsway Studios on 23rd October 1966. The Jimi Hendrix Experience formed on 6th October 1966 and the following week they were off on a four-date tour of France opening for pop singer Johnny Halliday. Five days after returning from France, Jimi, along with drummer Mitch Mitchell and bassist Noel Redding began making records at Kingsway Studios. HEY JOE reached No. 4 in the British charts on 4th February 1967.

PURPLE HAZE - Recorded by the JHE in London on 4-tracks at CBS and Olympic Studios. Chas Chandler, producer of Jimi's first two albums, reports that PURPLE HAZE was written in the dressing room of the "Upper Cut" on Boxing Day (26th December) 1966. On 25th November 1966, Jimi was introduced to electronics wizard Roger Mayer. After a gig at the Bag O'Nails on 11th January 1967, Jimi invited Mayer to bring his sound effects devices to the first recording session for PURPLE HAZE. Recording continued at Olympic Studios on 3rd February. This became the second single from the JHE. Released on 18th March 1967, Purple Haze reached No. 4 in the British charts.

FOXY LADY - When the JHE arrived at London's Olympic Studios on 3rd February 1967 their first single, HEY JOE, had just reached No. 4 in the British charts. The 3rd February Olympic session was the band's first as genuine stars. It was followed up with two more sessions at London's De Lane Lea Studios on 7th and 8th Feburary.
This inspired recording cluster yielded a string of Experience classics, including PURPLE HAZE, FIRE, THE WIND CRIES MARY playing and FOXY LADY. Jimi later recalled, "On FOXY LADY we just started playing actually, and set up a microphone, and I had these words (laughs)". Although it was never released as a single during his lifetime, FOXY LADY became one of Jimi's most popular songs. In later concerts, where serious playing replaced the wild stage act, Jimi still reserved FOXY LADY as a showcase for his famous gyration. This song was also the opener for the JHE albumin Britain, ARE YOU EXPERIENCED?, which reached No.2 in the charts during June 1967.

CROSSTOWN TRAFFIC was recorded by the JHE in London on 4-tracks at Olympic Studios on the 20th December, 1967. Additional tracks and overdubs were recorded in 1968 on 12-tracks at the Record Plant in New Yory. Dave Mason (of Traffic) joined Noel and Mitch for a "Crosstown Traffic" background chorus and Jimi is heard playing the piano overdubs. CROSSSTOWN TRAFFIC was included on the ELECTRIC LADYLAND album and it was released as the sixth JHE single in April, 1969.

ALL ALONG THE WATCHTOWER - The basic tracks were recorded in London on 4-tracks at Olympic Studios on 20th January 1968. Additional tracks and sound effects were later recorded on 12-tracks at the Record Plant in New York. Jimi played bass for this cut and Dave Mason(of Traffic) played the 12 string acoustic guitar. ALL ALONG THE WATCHTOWER was the fifth JHE single. It reached No.6 in Britain and No.20 in the U.S in November 1968.

VOODOO CHILE (SLIGHT RETURN) - Recorded by the JHE in New York on 12-tracks at the Record Plant on 3rd May, 1968. This cut was the last of eight takes performed before a camera crew. VOODOO CHILE (SLIGHT RETURN) closed the ELECTRIC LADYLAND album. It was also released in England as a posthumous single in October 1970 and remains the only Hendrix single to reach No. 1 in the charts.

HAVE YOU EVER BEEN (TO ELECTRIC LADYLAND) - Recorded on 12-tracks at the Record Plant in New York on 14th June 1968. Jimi also played bass on this title track for his third album. Impressed with the results during the playback of Have You Ever Been Jimi exclaimed: "I can sing! I can sing!" The ELECTRIC LADYLAND album was released in late September 1968 and reached No. 1 in the U.S. during November.

STAR SPANGLED BANNER - Recorded by Jimi playing multiple guitar parts on 16-tracks at the Record Plant on 18th March 1969. Along with 1983 (A Merman I should turn to be), the STAR SPANGLED BANNER is Jimi's most complex studio recording. It appeared on the second posthumous Hendrix album, RAINBOW BRIDGE, released on October 1971.

STEPPINCSTONE - Recorded in New York on 16-tracks at the Record Plant on 15th September and 23rd September 1969 with Mitch Mitchell on drums and Billy Cox on bass. An unfinished version of STEPPINGSTONE was rush released as a single in March 197O to coincide with jimi's "Cry of Love" tour. The record did not chart and was quickly withdrawn. STEPPINGSTONE was later re-mixed and it appeared on the fourth posthumous Hendrix album, WAR HEROES, released in September 1972.

FULL OF MIRRORS - Recorded on 16-tracks at the Record Plant on 17th November 1969 with the Band of Gypsies - Buddy Miles on drums and Billy Cox on bass. ROOM FULL Of MiRRORS appeared on the posthumous RAINBOW BRIDGE album in October 1971 Along with ALL ALONG THE WATCHTOWER and MAY THIS BE LOVE, it is the only other Hendrix release to feature his bottleneck slide guitar playing, however, when recording ROOM FULL OF MIRRORS Jimi did not have a slide handy so he removed a ring from his finger and used that!

EZY RYDER - Recorded on 16-tracks at the Record Plant on 18th December 1969 with the Band of Gypsies - Buddy Miles on drums and Billy Cox on bass. Steve Winwoodand Chris Wood (both former members of Traffic) later overdubbed the vibe tracks. EZY RYDER appeared on the first posthumous Hendrix album THE CRY QF LOVE, released in Feburary 1971.

FREEDOM - Recorded in New York on 16-tracks at Electric Lady Studios during sessions on 15th May, 18th June and 25th June 1970. FREEDOM was among the firts songs recorded by the Cry Of Love Band (Jimi, Mitch Mitchell and Billy Cox) in Jimi's new studio - 'Electric Lady'. The Ghetto Fighters, Arthur and Albert Allen, sang backing vocals. FREEDOM appeared as the opener for the first posthumous Hendrix album THE CRY OF LOVE

DRIFTING - Recorded with the Cry Of Love Band at Electric Lady Studios on 16-tracks on 25th June and 23rd July 1970. After Jimi's death, Mitch Mitchell invited Buzzy Linhart to overdub the vibe tracks. DRIFTING was released on THE CRY OF LOVE album.

IN FROM THE STORM - Recorded with the Cry Of Love Band on 16-tracks at Electric Lady Studios on 21st-22nd July 1970. IN FROM THE STORM was among the last three songs (along with DOLLY DAGGER and MIDNIGHT LIGHTNING) that Jimi added to his concert repertoire during the summer of 1970. It was featured as the conclusion of a near two-hour set at the Isle of Wight in England, one of Jimi's last high-profile appearances. IN FROM THE STORM, with Emeretta Marks providing backing vocals, is another highlight of Jimi's CRY OF LOVE album.

ANGEL - Recorded with the Cry Of Love Band on 16-tracks at Electric Lady Studios on 23rd July 1970. According to one account, Jimi wrote this song in January 1968 while awaiting trial for damaging a hotel in Sweden. Another source reports that ANGEL was inspired by a dream Jimi had about his mother. After Jimi's death Mitch Mitchell re-did the drum parts using a drum kit he had given Jimi for use in Electric Lady Studios. According to Mitch, ANGEL was "the most difficult and jigsaw-like track to put together and yet it became the most covered of Jimi's songs". It appeared on THE CRY OF LOVE album.

FIRE (Live) - Recorded with the Cry of Love Band on 8-tracks at the Atlanta Pop Festival on July 4, 1970.
Jimi appeared before the largest audience of his career at the Atlanta Pop Festival during a heatwave on the 4th July 1970. His performance at past festivals were always climactic events, but during this summer of revolutionary zeal, with the Woodstock movie and album topping the charts, along with the BAND OF GYPSY'S album. Jimi sounding the keynote for Atlanta Pop. His set commenced with this hot and humid FIRE.