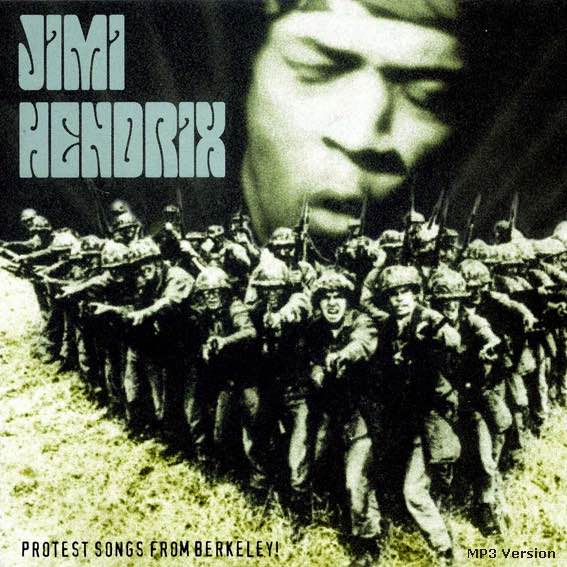 Protest_Songs_From_Berkeley
---
THE JIMI HENDRIX EXPERIENCE
Protest Songs From Berkeley [Rattlesnake, 1CD]
Soundcheck at Berkeley Community Theatre, Berkeley CA, May 30, 1970. Generally excellent soundboard stereo. The (original) 3CD bootleg has both early and late shows as well.
By 1970, Jimi Hendrix had had enough of the old band. Attempts by manager Mike Jeffrey to reunite the star guitarist with Noel Redding and Mitch Mitchell for a tour of the USA failed, when Hendrix nixed the idea and invited Billy Cox instead. Then something happened. US guardsmen fired “67 rounds over a period of 13 seconds, killing four students and wounding nine others, one of whom suffered permanent paralysis” at Kent State University on May 4.
What was a rock star to do?
Four days later, Hendrix and his Cry Of Love band took the stage at another university, in Norman, Oklahoma. By all accounts [from an audience recording], it was a furious show. New songs like Machine Gun, Message To Love, Lover Man and the lengthy blues of Hear My Train A Comin’ stole the show. His anti-war interpretation of The Star-Spangled Banner was now staple. At this show and also at the show in Fort Worth, Texas, Jimi wore a black armband with the large white letters “K.S.” in solidarity with the anti-war movement.
The student killings didn’t stop. On the night of May 14 and into the early hours of the next day, at Jackson State College in Mississippi, police opened fire on a group of student demonstrators killing two and wounding 12. One hundred and forty rounds were fired over a period of 28 seconds at a purported “sniper”.
According to Hendrix fan “stpsld”, the Berkeley concert on May 30 was special:
“These two Berkeley concerts were a kind of anniversary of the Peoples Park action in Berkeley a year previous. The unarmed crowd who had spontaneously tried to take back ‘their Park’ by taking down the barriers and re-entering the park, had been stopped violently by the Police (sent in by Ronald Reagan to seal off the park) who attacked the ‘protesters’ and others in the vicinity, shooting many with shotguns, armed with heavier shot than ‘normal’, wounding over a hundred, causing serious permanent injury to several, blinding one, and killing one young man who was watching from a roof. A few police were treated for very minor injuries, some caused from the unorganised, occasional, retaliatory bottles and stones thrown at them.”
When the Cry Of Love band arrived at Berkeley High School, they were followed by a film crew. This concert was recorded. Officially there were two shows on May 30. Only the second show has been released on CD as “Live At Berkeley” and only in 2003, 33 years late. The first show is now up at Wolfgang’s Vault as a for-sale digital download. Still no sign of a physical release.
The Cry Of Love Tour was unique in that Hendrix had tossed out much of his older repertoire and was developing live on stage new songs like Lover Man, Room Full Of Mirrors, Machine Gun, Freedom, Hey Baby (New Rising Sun), Straight Ahead and Ezy Ryder. He was also expanding on older songs like Red House and Voodoo Child (Slight Return). At the time, these tracks had not been released, and it was a challenge as much as it was a drag for Hendrix to keep his audience’s attention.
What’s left unreleased is the soundcheck which was released in 2002 on a bootleg, Protest Songs From Berkeley, with both the first and second Berkeley shows. At the soundcheck, Hendrix expressed himself almost entirely on his new material. Only a loose cover of Blue Suede Shoes breaks the pattern. As much as protestors wanted to stop the war, Hendrix wanted change - to make new music and not rely on his past.
This soundcheck suggested Hendrix would have much preferred to play an entire concert of new songs. Which means what we have here might well be looked upon as a “lost album”. Most of the songs are under three minutes, like a studio recording of the time. Hendrix only jammed on Blue Suede Shoes and Machine Gun.
When Hendrix died four months later, he left behind plenty of unreleased new music. It was left to his minders to figure how to release them, in what sequence, in what stage of completion and with what relevance. If you listen to the Berkeley concerts, clearly Hendrix was angry and in sympathy with the protestors. His songs Machine Gun, Freedom and Hear My Train A Comin’ all wanted to be part of the new radicalism. Yet his posthumous releases hardly reflected that. For example, a studio version of the anti-war song Machine Gun finally made it out of the vault on the 1975 posthumous release, Midnight Lightning. It’s original 12-min length shaved to just 7. The US officially pulled out of Vietnam on August 15, 1973.
To the company, Hendrix releases were meant to earn corporate dollars and nothing more.
Under his breath, we can hear the “fuck you”.

- Professor Red
As far as we can ascertain, the music here has not been officially released in its entirety.
+ + + + +
The Berkeley Concert Transcript
When someone at the CrosstownTraffic website mentioned that Jimi’s onstage dialogue at his Berkeley concert was not clear, a reader, “stpsld”, offered a transcript of the concert.

* Officially released on Hendrix In The West but in an edited version (4:28m). This longer bootleg version includes tuning and jamming.

Disc 2, tracks 2-12 recorded during rehearsal sessions at the Berkeley Community Theatre, 5/30/70, with Billy Cox (b) and Mitch Mitchell (d).