The Authentic PPX Studio Recordings Vol.1 - Get that Feeling 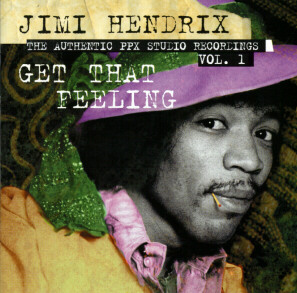 1. Get That Feeling info

2. How Would You Feel info

6. Gotta Have A New Dress info

During two studio sessions in 1965 and 1967, plus a live set at George's Club in Hackensack, New Jersey, Jimi Hendrix recorded tracks with Curtis Knight. Under contract to, and under the direction of producer Ed Chalpin, these studio sessions at PPX Studios in New York became infamous. Not only for being one of the earliest known studio sessions featuring Hendrix as a lead performer, but for the legal embattlement the sessions created.

The tapes have been released on various album combinations over three dozen times, as Chalpin continuously licenses them to record companies throughout the world. "As long as there are record companies who want to distribute this material in their market, I will license it to them accordingly," Chalpin once indicated, noting that each of those companies is only supposed to distribute the product in the country they are licensed.

But, according to CBH, the Knight material has never before been officially licensed on compact disc. That is, until now. Of course, we can document numerous pseudo-legitimate releases with some of the Hendrix- Knight material included, but certainly, this is the most comprehensive compilation of such material to date.

Chalpin has licensed the tapes to CBH Records in Germany. Engineers Kalle Trapp and Rainer Hansel went in and recut, re-edited and remastered the material into a six volume set. Some songs have been remixed, some mixed down to only include Jimi's guitar and vocals. Others have been completely re-edited, cut and spliced in such a way that choruses are repeated, verses are re-arranged, and guitar parts are extended. "Butchered," say some; "creative" argue others. Either way, we do get some new material. We get plenty of old material that's been cleaned up and made more presentable and listenable. And, we get the doctored tracks, which will always get challenged in the Hendrix circles.

Hopes ran high when news came of the official German release of The Authentic PPX Studio Recordings that maybe this time we'd have these Hendrix-Knight sessions presented in a sympathetic context with perhaps some detailed liner notes and new information to shed light on these sessions. Dream on!

Let's start with the liner notes, claiming these recordings are available for the first time on CD. Well, what about Historic Hendrix and Prologue, amongst others, which have been around for ages. The liner notes by Gitti Gulden may as well have been written by Chalpin himself as yet again we have a very rose-tinted version of events where he appears to be the innocent part who has been badly done to over the years.

The most interested part is the line-up details which lists: "Drums: Johnny Star. All other instruments played by Jimi Hendrix. Lead Vocals: Curtis Knight. Additional Vocals: Jimi Hendrix." Johnny Star's name has only appeared in historical references previously as a suggested engineer. Noted session drummer Bernard Purdie has made claim he was involved with some of these sessions. And, as far as Jimi playing all instruments on all the tracks, there's enough historical evidence to discount this statement as total rubbish. Even the photos included in some of the booklets show additional musicians in the studio.

In the original SPV releases, each disc comes with an eight page booklet. Graphic continuity brings this six volume set into a unified perspective. The six covers feature different photos from the Gered Mankowitz photo archives. Each inside cover features two different rare (some never before published) photos of Hendrix during the Curtis Knight period and sessions. On the Nippon Crown box set, the SPV covers are re-used on the individual discs. Each disc comes in a cardboard slipsleeve. A 16-page booklet, encapsulating the same pictures and text that appeared in the SPV releases, is included. The six discs are then encased in a thin cardboard "box", another Mankowitz shot used on the metallic-ink four-color cover.

Most of the material has been previously released on numerous titles, the German Astan and Babylon labels providing in vinyl versions the prominent portion of the material presented here.

The first in the set of releases, a look at the track timings on this disc (total 30:25), would make you feel already like you're getting ripped off even if this was previously unheard music. Well, just wait until you actually look at the music.

A cursory glance at the track listings would fool you into believing that these are basically remastered versions of the original Capitol release, although you couldn't be any more wrong.

The title track "Get That Feeling" is incomplete, giving just about half of the complete 10:10 track. Also, the intro countdown is missing. The mix has also been changed giving a virtually mono image and, as we shall see, other tracks have had the same treatment.

"How Would You Feel" is the same stereo version as on The Eternal Fire of Jimi Hendrix, while "Hush Now" fades early. From here on, things heat up as engineers Trapp and Hansel sharpen their meat cleaver, I mean tape splicing blades, for "all new" remixes.

"No Business" is cut at the 2:30 mark, and the first verse and chorus are repeated before the fade out, which is slightly shorter than the original version. So, although the song appears longer, it's technically incomplete.

"Simon Says" is similar to The Eternal Fire mix, though here the drums are more pronounced and central in the mix.

"Gotta Have A New Dress" has the guitar solo edited with part of it repeated.

"Strange Things" is also subjected to a hatchet job with the intro repeated. Also, the vocal line "Strange Things" is doubled up in two places, though here the last "Back to back/They shot one another" verse is missing. Vocals are central in the mix rather than panned to one channel, as they were originally.

Finally, we come to "Welcome Home" which survives intact.

As you can see already, it looks as though the tangled web of the Curtis Knight material continues to be woven into an ever more complex array of mixes and edits.
Jimi Hendrix