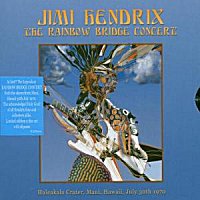 http://www.cosmik.com/aa-march03/reviews/review_jimi_hendrix.html
JIMI HENDRIX
The Rainbow Bridge Concert (Haze)
Reviewed by John Sekerka
After years of legal battles the Hendrix estate can finally start dispensing Jimi's logjam of guitar wank. Apparently the legions can't get enough of this stuff, so let's not stand in their way. I still have footprints on my back from last time. Release number one out of the gates is the infamous Rainbow Concert. Infamous because the original album accompanying the spotty documentary gig didn't contain any music from the actual show. har - that's a good one. Cutting to the chase, what we have here is the complete performance, both sets on two discs, slightly cleaned up from the rough 32 year old tapes, of Jimi ripping through some of his standards ("Foxy Lady", "Purple Haze") and noodling away on some big time power trio jams (me: yawn, guitar freaks: hooray!). Playing at the foot of a volcanic crater and contending with strong magnetic fields in Maui, this has to be the strangest gig of Hendrix's career. Apparently the meandering film is also something of a bizarre trip, and frankly, the lost nugget I would rather experience. Two months later Jimi would die, and soon after, phase two kicked in as his recording career sky rocketed with an endless flood of sketchy comps and live bits. Now the family's in charge: welcome to stage three.
[Pick this up at http://www.thefunkstore.com/NewHendrixRainbowBridgeCD.htm.]
© 2003 - John Sekerka
Jimi Hendrix